Bishop Kenneth Ulmer: The king still has one more move!

This week i heard Bishop Kenneth Ulmer  speaking about a chess-painting, most probably by Friedrich Moritz August Retzsch on Goethe´s Faust. 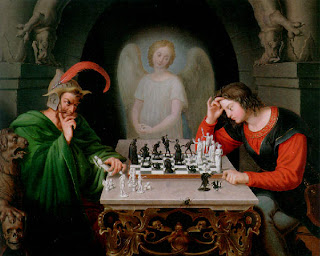 Eric S. Ritz writes this note about this picture :

On display in the magnificent Louvre Museum in Paris, France, is that dramatic painting of Goethe's Faust. Faust is seated at a table engaged in a competitive game of chess. And at first glance, it looks like Faust is losing. His opponent in the chess game is Satan. The devil sits there grinning smugly. He thinks he has the victory in hand. He is pointing at the chessboard with an evil leer and he is gloating.

As you look at the painting, you can almost hear the devil shouting: "Checkmate! Game’s over! I win!"

However, a person with a keen eye who knows the game of chess can see that the match is not over at all. As a matter of fact, just a few years ago, an internationally famous chess player was admiring the painting when all of a sudden he lunged forward and exclaimed:
"Wait a minute! Look! Faust has another move and that move will give him the victory!"

The Champion in You

Email ThisBlogThis!Share to TwitterShare to FacebookShare to Pinterest
Labels: Bishop Kenneth Ulmer, The king still has one more move