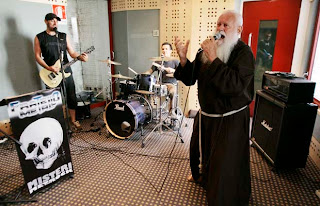 Italian Friar Cesare Bonizzi, also known as Fratello Metallo(Metal Friar), is quitting his heavy metal music career, saying the devil had made him too much of a celebrity for his own good.
Photograph by: Alessandro Garofalo, Reuters


MILAN - Italy's "Brother Metal," a 63-year-old monk who became famous for singing in a heavy metal band — habit and all — is hanging up his microphone, saying the devil made him too much of a celebrity for his own good.

The white-bearded Cesare Bonizzi, a Capuchin who recorded CDs for a punk label and was the lead singer for the band Fratello Metallo (Metal Brother), said the devil was up to his usual mischief.

The video shows one of the monk's band members shaving off Bonizzi's long mane of white hair as a sign of his turning a new leaf on life.

For years Bonizzi performed at concerts wearing his traditional Franciscan brown robe, sandals and white rope around his waist.

His second heavy metal CD was called "Mysteries," and was inspired by a group of southern Italian women who sang about the Virgin Mary.

Bonizzi, who fell in love with heavy metal when he attended a Metallica concert some 15 years ago, says fame had put him on the wrong path. But he still thinks heavy metal can be a means to spread the gospel message of pace and love.

"I think that metal is the strength of music itself. Metal is a brother," he said in the video.
http://www.youtube.com/watch?v=GgTkWc9aLPo  ( Reuters video)