Re-post: if this doesn't warm your heart, you're awful. 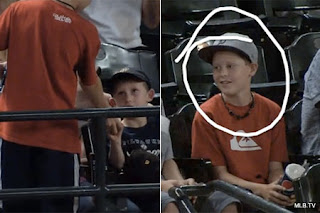 There's hope for America's future yet!

In one of the most heartwarming scenes you'll ever see, a young Arizona Diamondbacks fan named Ian made Wednesday's play of the day at Chase Field after an even younger fan named Nicholas missed a ball thrown his way by Milwaukee Brewers second baseman Rickie Weeks(notes).

Though the dropped ball was instead handed to Ian by another person, he immediately recognized what he had to do after seeing Nicholas in a distraught state after botching an attempt at a souvenir. With an amazed audience looking on, Ian marched back down the stairs and graciously handed the baseball over to Nicholas, a Brewers fan, without any prodding from anyone else.

As Deadspin notes, "if this doesn't warm your heart, you're awful."

Recurring case of the idiot priest

Ordination changes many things about a man theologically, sociologically and emotionally. But there are some things the sacrament will not change. If you ordain an idiot, you wind up with an idiot priest.

Idiot priests, rather than loss of faith, have caused most of the cases I have encountered of people who have left the Catholic Church. Poorly-prepared or totally unprepared homilies are one major element, abuse is another, pastoral insensitivity in times of need is a big third, but by far the most faith-destructive encounters between idiot priests and the People of God occur in connection with the Sacrament of Reconciliation.

I know a woman whose journey away from Catholicism began as early as her first confession. The priest was nicknamed “Baby Jesus” by the other priests in the parish because “he thinks he’s God almighty.” His haughty disdain for her as a child taught her that God is not worthy of any form of relationship.

According to a news report from Kerala, India, a priest there has been reported to the police for slapping a nine-year-old girl. Her crime? The priest had decided that all the children of the parish must go to confession at least once every three months, and she admitted she had not.

In order to convince the children of the importance of celebrating God’s forgiving love, he allegedly sent one of them, perhaps the only one honest enough to admit to her “dereliction,” to the hospital with a swollen face and a loosened tooth. Besides not having any right to force others to receive the sacrament, he could not see the idiocy in thinking that punishment is the best way to teach the sacrament of forgiveness.

If that girl grows into a woman who avoids the Church, we will be able to accurately date the beginning of her departure to this past July 9.

Why do we over and over again hear from friends, family and the media about priests who drive people away from the Church? Isn’t a priest’s job to draw the sheep to the Good Shepherd?

Part of the problem is one of those sociological effects of ordination combined with idiocy. Most priests merely have status in the Christian community. Some priests enjoy status in the Christian community. If the priest is also an idiot, having status will merely make him more obviously ineffectual; if he enjoys having status, it will make him abusive and repulsive.

Such destructive men often get away with their idiocy because people are smart enough and faith-filled enough to know that our commitment is not to priests but to Christ. Others fear the status that priests have as somehow representing God almighty. So, people have often let priests get away with behavior they would not tolerate in anyone else. But, thanks in part to the abuse crisis in the Catholic Church, more people are willing to act.

Such a one is the father of that girl in Kerala. He went to the police to report the beating of his child. He acted as a normal parent rather than an idiot.

When idiot priests are allowed to inflict themselves upon the Church with impunity, people either leave the Church or at least distance themselves from it emotionally and socially. That is changing. More and more often, people are speaking up, refusing to be victimized or to leave. They confront the idiocy for the sake of protecting their faith. We need that confrontation. The likelihood of reforming idiot priests is low, but at least we can present ourselves as a Church that is not idiotic.

In one of his own less forgiving moments, the Lord said, “If any of you put a stumbling block before one of these little ones who believe in me, it would be better for you if a great millstone were fastened around your neck and you were drowned in the depth of the sea.”

The news report did not mention if the priest in question is practicing holding his breath. It did, however, say that he is preparing to bring his vigorous sacramental pedagogy to the United States. Since the slapping incident has become international news, he will likely have trouble securing a visa to enter that country. He may want to stay away in any case, since his mode of religious education can get him put in jail there, though that may happen in India anyway.

Where the Gospel, common sense and common decency cannot restrain idiot priests, common law must. Of course, the better solution would be to not ordain idiots in the first place, but that would require that we be free of idiot superiors and idiot bishops. But they are simply idiot priests who have “made good.” So, we must rely upon non-idiot clergy and laity to rein in the idiots for the sake of the “little ones” of whatever age.

Last week New York City witnessed a horrible tragedy. An eight-year old Hasidic Jewish boy was supposed to meet his mother in the afternoon, three blocks away from his summer camp, but he failed to show up. The city’s highly insulated, but tightly knit Hasidic community made major efforts to find the boy.

A few days later, a close circuit video led the police to the home of a Jewish man who confessed to killing the young boy, cutting his feet, which he stored in his freezer and then dismembering the rest of the child’s body. Marks on the boy’s arms indicated that he had put up resistance.

Even New York City’s police commissioner, Ray Kelly, who is used to handling the toughest terrorists and criminals, was visibly moved. “In this business, you see a lot of violence,” Kelly said at a press conference announcing the killer’s arrest. “Here, it defies all logic. That’s what is so disturbing about this case. It’s heartbreaking.”

I have been thinking about the young boy’s parents, what they must have gone through when he failed to show up, when he was supposed to see his mother. And now they will have to live with the tragedy for the rest of their lives.

Last week, there was the horrible news from Mumbai. The three bomb blasts on Tuesday evening left 18 people dead and over hundred injured. The last person to die was a 24-year-old man, who must have been someone’s son, brother, husband or father. It is hard to fathom what this young man’s family must have gone through on Tuesday night trying to locate him and now knowing that he will never come back.

Such thoughts take me back to the harrowing scene in Mani Ratnam’s Bombay when the film’s protagonists, played by Arvind Swamy and Manisha Koirala, search for their twin boys as Mumbai burns in the aftermath of the 1993 riots, and A R Rahman’s hypnotic background score silences their helpless voices. I have never been in a war zone, or witnessed a riot or a bomb explosion, but I always imagine it would be a scenario like the one created by Ratnam.

The night of the bombings there seemed to be a lot of anger that once again Mumbai had been targeted by terrorists.

Later, journalist Naresh Fernandes suggested in his thoughtful piece on The New Yorker’s website that a certain amount of cynicism had crept into the soul of Mumbai. But I would like to believe that many Mumbaikars still care for and feel the pain of those who have lost their loved ones.

We live in very difficult times. Death and destruction is in the news at all times from troubled spots in the world — Pakistan, Afghanistan, Iraq — and from within India (Kashmir, the North East or recently in Forbesganj, Bihar). Each time a person — man, woman and child dies — many family members mourn that death. Each of the 3,000 plus people, who died when Al Qaeda’s terrorists crashed their two planes in the World Trade Center’s Twin Towers, left behind survivors and layers of heartbreaking stories.

What is more troubling is that our governments have little idea about how to eradicate organizations and individuals who are hell bent on destruction, revenge and creating terror. Ten years and trillions of dollars later, the US claims it is winning the war against terror, especially after Osama Bin Laden’s death, but I believe terrorism is not going to end, and will be a way of life for us for decades into the future.

The day after the gruesome discovery of the young Hasidic boy’s death in Brooklyn, I was chatting with a friend on Twitter who has a young son. He had been following the case of the missing boy and was shaken up by the news. I suggested to him that he should go give his son an extra hug that night. We should feel blessed that we have our loved ones with us. For there are many whose family members will never come back home again.