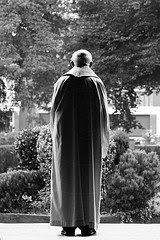 VATICAN CITY, MARCH 20, 2008 (Zenit.org).- The essence of priestly ministry is service,
Benedict XVI says, encouraging priests to renew their "yes" to the call of God.


The Pope spoke about the essence of the priesthood today at the Holy Thursday chrism Mass
held this morning at St. Peter's Basilica. The Mass brought together some 1,600 priests,
and cardinals and bishops to renew the promises they made on the day of their ordination.

According to the Old Testament, the Holy Father explained, there are two tasks that
define the essence of the priestly ministry: to be present before the Lord and to serve.

"To be present before the Lord should always be, in its depths, to take charge of
mankind before the Lord who, for his part, takes charge of all of us before the
Father," he said. In the second place, the Pontiff continued, the priest should
serve.

He said that this service is manifested in a concrete way in the Eucharistic celebration.
There, the Pope said, what the priest does "is serve, to complete a service to God
and a service to man. [] The homage that Christ offered to the Father consisted in giving
himself unto the end for man. The priest should unite himself with this homage, with this
service."

The word "serve," in its many dimensions, implies "the correct celebration
of the liturgy and the sacraments in general, carried out with interior
participation," the Pontiff affirmed.

Benedict XVI continued, saying that an attitude of service implies that the priest should
always be in a state of learning: learning to pray, "always anew and always in a
deeper way," and learning to know the Lord in his word so that his preaching becomes
effective.

"In this sense, 'to serve' means closeness, demands familiarity," the Pope
said.

But he cautioned that this familiarity also implies a danger: that the sacred, with which
priests come into constant contact, becomes a routine.

"In this way, holy fear is snuffed out," the Holy Father warned.
"Conditioned by all the habits, we don't perceive the fact that is most great, new,
surprising -- that he himself is present, speaks to us, gives himself to us. We should
fight unrelentingly against this habitualness in the extraordinary reality, against the
indifference of the heart, recognizing anew our insufficiency and the grace there is in
the fact that he surrenders himself in this way into our hands."

To serve implies obedience, the Bishop of Rome affirmed: "The servant is at the
command of the Word. [] The temptation of humanity is always to want to be totally
autonomous, follow one's own will alone and to think that only in that way, will we be
free -- that only thanks to a limitless liberty will man be completely man. But in this
way we put ourselves on the side contrary to the truth."

We are only free, he cautioned, if "we share our liberty with the rest" and
"if we participate in the will of God. This fundamental obedience that forms part of
the essence of man is much more concrete in the priest.

"We do not proclaim ourselves, but rather him and his word, which we cannot dream up
on our own. Our obedience is to believe with the Church, think and speak with the Church,
serve with her," the Pope continued. This implies, he acknowledged, what Christ
predicted for Peter, "They will lead you where you do not want to go."

"This allowing ourselves to be led where we do not want is an essential dimension of
our service, and it is precisely in this way that we become free," Benedict XVI
asserted. "If we allow ourselves to be led, even though it could be against our
ideas and our projects, we experience again the richness of the love of God."

The Pope concluded with an allusion to the washing of the feet, with which Christ,
"the true High Priest of the world" wants "to be the servant of all. [ ]
With the gesture of love to the end, he washes our soiled feet; with the humility of his
service, he purifies us of the illness of our pride."