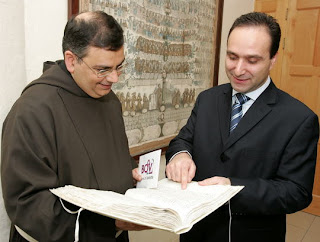 Two manuscripts, believed to date back to the mid-1700s which form part of the collection at the Franciscan Capuchin Friary’s Central Library in Floriana have been restored thanks to financial support by Bank of Valletta.

The first manuscript titled Gozo Antico-Moderno e Sacro-Profano’, is thought to have been the first draft of the manuscript by Giovanni Pietro Agius de Soldanis, bearing the same title and dating back to 1746.

The restoration involved dismantling the manuscript, followed by cleaning and leaf casting. Through this process, the restorer repaired the holes in the pages by filling them with paper pulp, which was then pressed and dried, so that the page became whole again.

The second manuscript entitled ‘Apparato Cronologico’ (dated 1751) was by P Luigi Bartolo. It is directly related to the setting up of the Capuchin Order in Malta. The manuscript also includes a catalogue of the first Maltese Capuchin friars,. The same restoration process was applied in this case, although this particular manuscript required a higher level of intervention since it had been neglected for a long period of .

The Bank’s sponsorship was presented by Michael Galea, Head at CEO’s Office of Bank of Valletta to Fr Martin Micallef OFM Cap, Provincial Archivist of the Franciscan Capuchin Friary in Malta. (picture)